A guest of Greek and German descent was checking out of the hotel this morning.

“I hope everything was good with your stay.  Did you enjoy your time in the area?,” I asked him.

He replied:  “Yes, it was great, but this heat is just so oppressive.  Everyone always says the Greeks are lazy, but with this heat you can’t really do much, can you?  It drains you.”

Gee, I’m *SO* glad that our purported laziness correlates directly to the thermometer.  I was going to be really butt-hurt if you thought we were lazy all year round, you know…

Yesterday in Nafplio a “townhall” meeting of sorts was held in front of the mayor’s building where people gathered (those who heard about it, at least) and started a dialogue about their frustrations as Greek citizens, particularly after this past year where austerity measures enforced upon them  are making many feel like they are being punched non-stop in the head.

(UPDATE: By the way, this small get-together is pretty insignificant compare to what was happening in  the rest of Greece – which was buzzing with massive peaceful demonstrations this past week.  The protests continue this weekend.)

Under pressure from the European Union and the IMF, the Greek government recently announced a new wave of austerity measures as it desperately tries to salvage a country long plagued by political corruption, rampant tax evasion and a host of other issues. The Greeks’ frustration at this decisive time is anger and frustration at the inept politicians who have been governing and stealing for far too long (and obviously opening foreign bank accounts to hide their indiscretions.) People are fed up with a political system that has by and large operated on dishonesty, greediness and hypocrisy.  Why hypocrisy?  Because now that the rope is around Greece’s neck and the noose is getting tighter, it is the hard-working Greek citizen who must pay the price. Literally.  Higher taxes, higher gas prices, higher diesel prices, higher electricity rates, higher water rates.  Prices are only going up.  Jobs are being lost.  No viable solutions are being offered. When is this going to end? Why should the average, struggling man/woman/child pay for a government that has never had their country’s interest at heart?

But I digress…what I wanted to say is that yesterday’s meeting was the first time in a long time when I felt HOPEFUL.  I felt so much hope because there was a dialogue happening.   The conversation wasn’t rife with yelling, or fighting, or bringing up political parties into the mix.  It was about venting our frustrations and agreeing that we need to keep the dialogue going.  No matter how negative the subject matter is, it must be discussed. A revolution can start small – with just a conversation, right?

Coincidentally the other day I was discussing this subject matter with an acquaintance –  a 60-year-old man, in fact – and I told him that today’s young generation has nothing to give them hope, to react, and to entice change.  I compared these recent years to 1960s and 1970s – the infamous years in which an entire generation got involved and made some real changes.  And I didn’t just refer to the United States.  Even in Greece there was upheaval at that time – leading to the overthrow of the junta, the military government which ruled Greece at that time.  Those generations could envision a better future.  They inspired each other.  What about our generation though?  We are painfully aware that a new Greek government will be just as corrupt and inept as the current one.  So far this entire predicament we are in has felt endless, void of solutions and without hope for a better future.

Seeing both old people and young people gathered together, being open to each other and actually listening to one another was a tremendous experience for me.  I left that meeting feeling hope and knowing that people are actually starting to care and they want to see a change for the better. It inspired ME to be more involved in the dialogue. I left that meeting with a pep in my step (which I’m sure I will get a ton of shit for by my sister…not for feeling happy, but for actually writing “pep in my step.” She can deal with it.)

The Eurovision song contest, held in Düsseldorf, Germany this year, is Europe’s yearly homage to…well, lets call it “singing.”  It’s a “big deal” in Europe – at least from what I can gauge here in Greece – where the news broadcasts allot time to discuss Greece’s preparation, our chances of winning, the performance…….blah, blah, blah.  I’m putting myself to sleep just talking about it.  Here’s a question for the newscasts:  aren’t there more important issues to discuss than Eurovision?  Our song is not even that great.  Scratch that: our song is crap, get over it and report some actual news instead of this televised karaoke mess.

Based on Internet report the winner of the 2011 Eurovision contest is Azerbaijan. Here is video of the winning song:

So basically, Eurovision takes all the crappy auditions from American Idol and sends them out on a stage.  We need a Simon Cowell intervention, STAT.

Also, let me just make clear that I did NOT watch the live broadcast.  I was at my sister’s when it aired and actually got up and left.  I went home and had more fun watching a Beatles documentary. I couldn’t really even watch the entire winning video this morning.  My oatmeal was dangerously close to coming back up.

Heard by: By two older gentlemen (probably in their late 70s or early 80s, by my best estimate,) walking by the Xenon Cafe where we’re having a midday coffee break.

As they slowly mosey on by, they take a look at the crowd ( there were no more than 4 tables full), look at each other and say, “This crowd is too young, lets keep on walking.”

Epiphany or Theofania as we say it in Greek, is “a Christian feast day that celebrates the revelation of God the Son as a human being in Jesus Christ.”  Or in more simple terms, it basically commemorates the visit of the Three Wise Men to baby Jesus.

In Greece the holiday season doesn’t officially end until we celebrate Theofania.  On January 6th, once the church liturgy ends, the blessed cross will travel in a procession down to the town’s nearest water source (be it the sea, a lake, or a kiddie pool,) where upon it will be thrown into the often freezing waters.  Hoards of young boys will frantically jump in the water in an attempt to be the lucky one who gets the cross.  This boy is the blessed one – and one reason he is blessed is because he will then partake in his own little procession across his town, showing his special cross to as many fellow citizens as he can.  Why does he do that?  Because people will give him money for it.  For what reason, you may ask? “Gia to kalo,” as we say in Greek.  “For the Good” – more for the good of the young boy’s pocket.  In our modern times the glory of getting the cross no longer applies because, sadly, these days getting the cross equals a nice pay-day.

In smaller towns, such as my mother’s hometown Nea Kios, located a few kilometers outside of Nafplio, there’s an additional Theofania custom, which is taken quite seriously.  After the pre-Theofania liturgy, the priest will walk to every single house in the town bearing with him a vial of freshly blessed holy water and a handful of basil.  He will dip the basil in the water and sort of spray everyone in the house as well as every single room in the house.  It’s a lovely, albeit dying custom that represents a fresh start in the home – a blessing for the whole year, for the whole family.

What mars this custom, much like the cross-diving custom, is that money always comes into it. When you hear the knock on the door, you don’t see the priest.  You see his helper, standing at the door with an open bag in hand (always discreet), waiting for you to give money towards the cause.  The cause is nothing more than to line the priest’s pockets with dough.  I guess a religious blessing gets more expensive each year.  What ever happened to a priest blessing something for the sake of the blessing?  Isn’t that what religion is about? I’m the least religious person I know, but isn’t it a sin that a priest is a money-grubbing d-bag who will ask for money at any given chance?  Why must everything related to religion have to be related to money? To me this priest (and yes, I’m referring to one in particular) is the ultimate walking hypocrisy. 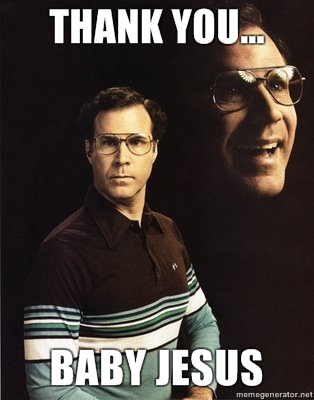 If you help me win the lotto, then I'd be really thankful...

Since I moved to Nafplio two years ago I’ve been see-sawing between loving it and hating it.  The American lifestyle is but a thing of the past for me – I could never adjust back to the daily grind that I used to live by; but there are times when I sorely miss things that I simply cannot find here in Greece.

I miss my friends. I miss supermarkets being open on Sundays and shops staying open all day for my convenience. I miss international cuisine. I miss Target so much. I miss Peet’s Coffee.  I miss Barnes & Noble.  I miss the organization of state services – knowing that when I go to the DMV I will be helped. I miss organized city planning – working stop lights, visible stop signs, all the things that make it easy to go from Point A to Point B.

Then I take a walk through Nafplio and I change my mind.  It actually is pretty damn great to live here despite some of its shortcomings.  I’m incredibly lucky to live here.

My favorite plaza and my favorite cafe all in one convenient place. 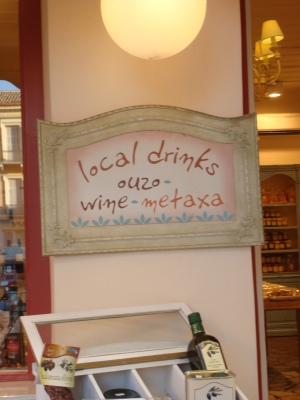 I'll have a little bit of everything...

A lovely burst of color.

A fortress among the waves...

Small shrine to the Virgin Mary along a footpath. 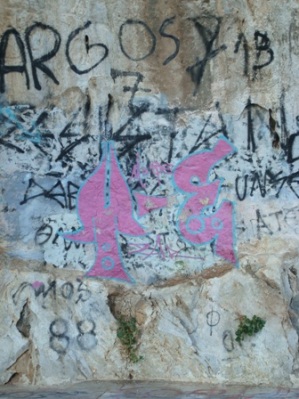 Years of statements layered upon the rock.

Fortress on the rock against the blue sky. A living postcard. 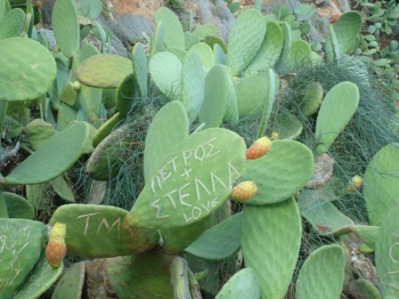 Lovers etched on the cactii.

The original gate to the city of Nafplio. 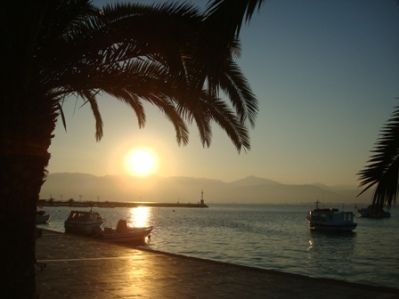 The sun is slowly departing... 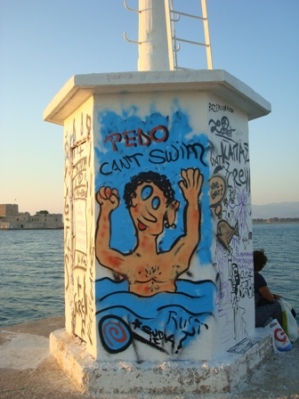 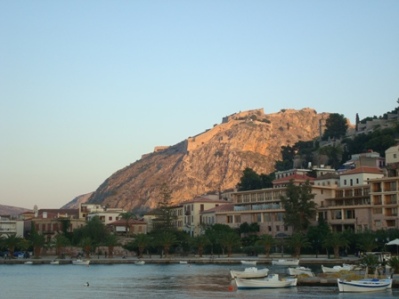 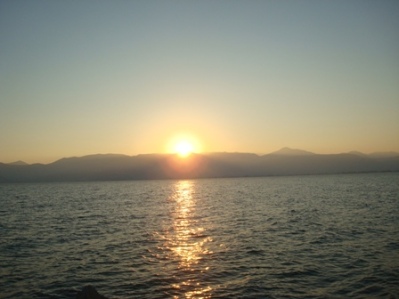 I had an awesome afternoon yesterday.  In fact, I can confidently declare it was the most awesome afternoon of the summer.  I realize it was September 18th, but hey, fall doesn’t technically commence until September 22nd, so my awesome day still falls within the summer parameters.  And when the afternoon boasts a temperature of 90 degrees F your mind doesn’t stray far from summer mode.

The scene:  an afternoon beach trip.

My afternoon started after my jail shift work shift with a fabulous dip in the nearby beach of Plaka.  Plaka in Greek means “a large plate,” and so in Plaka the pebble-covered beach has these large rocky plates in the water – a geological aberration that is not really a hassle, but they is just enough of a deterrent to keep most of the tourists away – or at least the tourists that you don’t want to deal with.

Behold the beauty of the Argolid coastline:

A sloth invades the view!

Let’s try this one more time without the unwanted intruders… 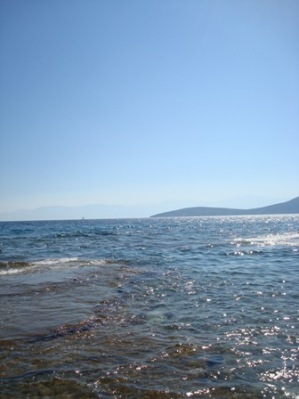 I can't really explain just how great this feels.

The sea water was so clear, you just wanted to drink it all in.   Or simply stay in the water until your skin was as wrinkled as a raisin.  It was simply marvelous.  And after our swim it was time for sustenance.

END_OF_DOCUMENT_TOKEN_TO_BE_REPLACED

Error: Twitter did not respond. Please wait a few minutes and refresh this page.